Cone drills as a tool in speed and agility training 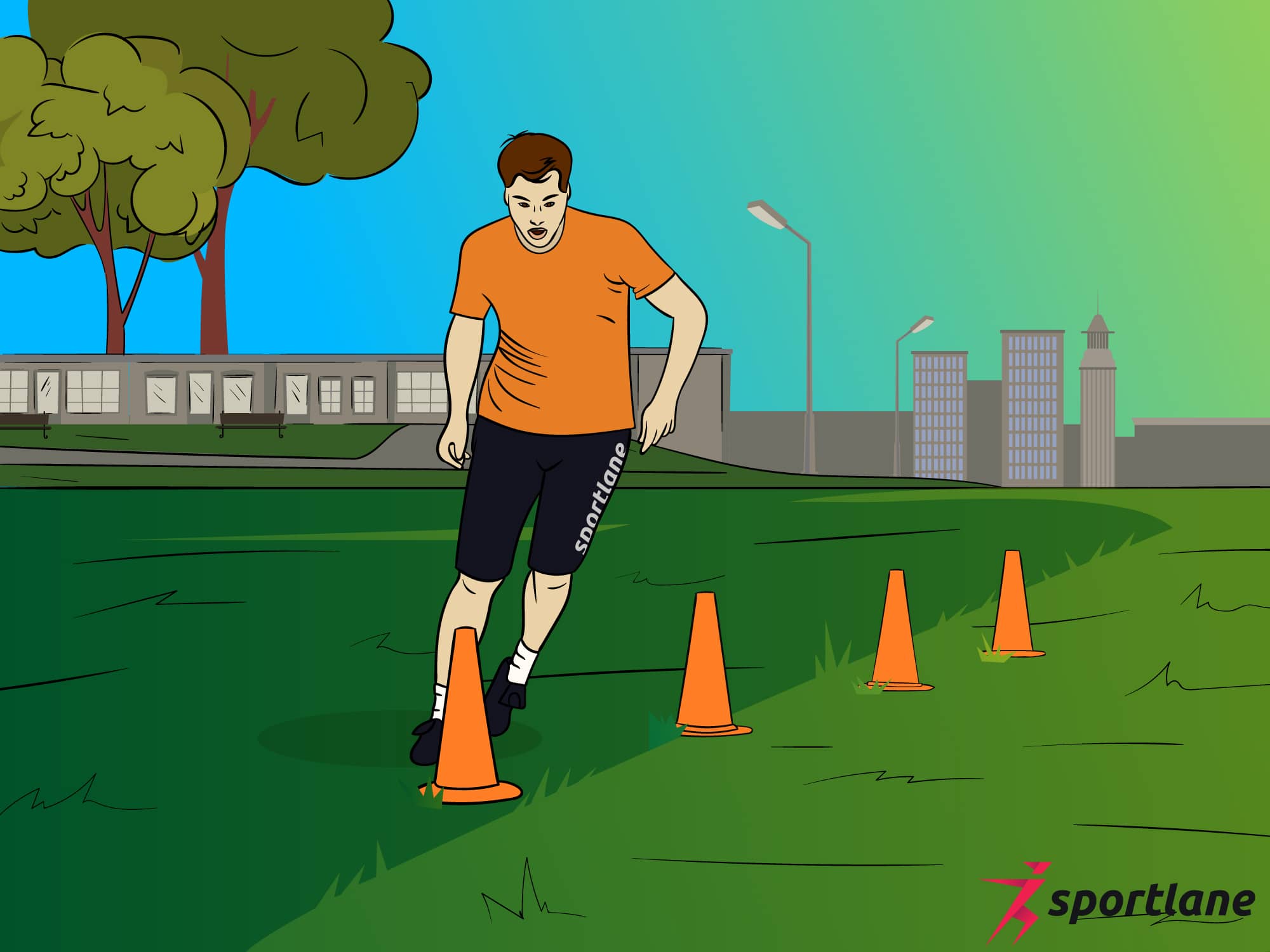 Introduction to speed and agility

Speed is the rate at which someone moves or travels in a straight line from point A to point B. The key to improving your results is to understand what muscles do the work during a particular activity. Overall, your arms and legs need to be strong enough to push your body in a forward direction, and greater speed is achieved by doing speed drills. Athletes know that they want to be faster, which is why these exercises come naturally to them.

However, rarely do we see an athlete running a long-distance without making multiple sudden changes of direction and stops. Except for sprint racers, marathon runners, and a few other professions, sports players are used to speeding up, decelerating, jumping and changing direction. Because of that, athletes should do a variety of agility drills if they want to excel in the world of sports.

Soccer requires players to cover more ground with different speed and pauses in movement during the match. Soccer agility drills are equally important as speed drills because players are also used to running linearly. However, a sport that you play does not solely define your speed and agility training. In football, defensive and offensive players perform diverse tasks, and that changes the way they prepare their bodies for action. A linebacker and a quarterback do not have the same speed and agility training program.

If you want to improve your results, you also need to focus on the position that you play. All team sports have at least two positions that differ from one another. Goalkeepers in soccer or ice hockey do not cover a lot of ground as their primary goal is to save the net, which is why their athletic performance training is focused on agility drills rather than speed drills. However, an athlete needs to train speed drills and agility drills to achieve top results.

Speed and agility training usually includes some cone drills because it builds leg strength and explosion. Agility cone drills are also an essential component of many professional athletes because they activate your legs and core muscles. What sports players fear the most are injuries, and agility cone drills help prevent them by strengthening tendons in your body. Carefully choose the physical level that you are on if you want to maximize your performance.

X-Drill is an effective exercise that will help you make sudden changes in direction, body posture, and footwork. Prior to doing the exercise, put four cones at the distance of five yards in a square shape. Choose the starting cone, and run diagonally to the opposite cone. Shuffle laterally to the next cone, and cross over back diagonally again. Once you reach the last cone, sprint to the first one. Repeat this process a few times, and then change the direction to complete the exercise.

123 Back is a defensive agility cone drill that requires a partner or a coach to tell you where to go. This exercise is all about the change of direction and reacting to what your coach commands you to do. This agility cone drill can be done with or without a fitness rubber band. Start by placing three cones in a straight line five yards apart, and place another cone in the back in alignment with the central cone, three yards apart. Your coach will tell you which cone you need to reach as fast as possible and immediately go to the next one. The coach should select six to eight commands before finishing a single rep.

The “L-Drill” is an excellent agility cone drill used by many athletes. You do not need a lot of space for it, and this drill will work all the important muscles. Your speed, agility, and change of direction will improve after this exercise. Place three cones in the shape of the letter L. Start in a three-point stance and sprint to the central cone. Once you reach it, touch it with your hand, and sprint back to the first cone. Touch the cone with the same hand, and run around the central cone with your inside foot making the turn. Get to the last cone, go around it, again making a hard turn with your inside foot. Sprint around the central cone and to the first one. You should repeat this pattern several times in both directions.

The staggered shuttle is a variation of pro agility shuttle. This drill will help you be fast in a small space, and it will improve your footwork significantly. Instead of placing three cones at five yards apart, place the first one five yards apart from the central cone, and the last one three yards apart from the central cone. Just like with pro agility shuttle, start in a three-point stance and sprint to the nearest cone. Once you reach it, position your body for a sprint to the furthest cone. After touching the ground with the same hand as the direction you are running in, sprint back to the central cone. Change the position of the cones and repeat this drill several times in both directions.

Run-shuffle-run is a mandatory speed drill for most football, basketball, tennis, and baseball players because it increases your lateral mobility. Just like 123 Back, this is also a defensive drill that requires four cones. Place the cones five yards apart in a straight line. Sprint to the first cone and instantly change your body posture. Move laterally as fast as possible to the third cone, and sprint to the last cone. Make a turn and run to the nearest cone. Move laterally until you reach the second cone, and sprint back to the first cone. Repeat this drill in both directions several times.

Run-shuffle-shuffle run is a similar drill to the previous one. This exercise is particularly effective if you have an elastic cable wrapped around you and a training partner or a coach to make sure that the cable is not loose. Instead of placing four cones five yards apart, place two cones five yards apart. The third cone should be placed four yards apart from the central cone. Start by sprinting to the central cone, and change your body posture into a lateral shuffle as soon as you reach it. Get as fast as possible to the last cone, and return to the central cone in a lateral movement as well. Once you reach the central cone for the second time, sprint back to the first cone. Repeat this drill in both directions several times.

Cone alley should be included in every speed and agility training program because it improves body positioning, change of direction, acceleration, and more. This drill will not only improve your speed and agility, but it will also enhance your peripheral vision. Three agility cone drills are included in the cone alley, and the setup is almost the same for all three of them.

The first version of the cone alley requires you to put four cones in the back and three cones in the front four yards apart to form a zigzag pattern. Cones can be slightly offset. Start at the back and sprint to the first front cone. Once you reach it, backpedal as fast as possible to the second back cone thus forming a V pattern. Use your peripheral vision to see when you are close to the cone, go around it, and immediately sprint to the central front cone. Continue doing this drill in the same way until you reach the last cone. Once you do it in one direction, repeat this drill in the other direction.

Version two of the cone alley has the same setup as version one. However, instead of backpedaling to the back cone, you should rotate your hips, and sprint to it. This version is especially important in football because of the sudden change of direction both in offense and defense.

Conde drills are the most popular and yet highly effective exercises for speed and agility training. Coaches and conditioning experts come up with a variety of cone drills that cater to the specific needs of particular athletes. In this article, we have revealed only the fundamental ones. In the future, our team at Sportlane will prepare guidelines on speed and agility training for distinct types of sports, and categories of athletes (pro and amateur).

As a final remark, we invite you to take a look at current sports camps and academies that are presented on the Sportlane platform by our partners. Search and book the one that fits you best in terms of budget, skills, location preferences.